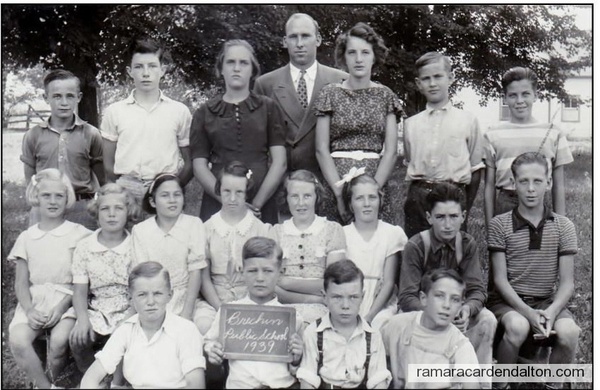 The era of the Sebright Telephone Company came to an end at 2 am on Sunday, December 19, 1971, when it was taken over by Bell Canada after serving the area for 58 years. It was in 1913 that the late John D. Flemming and the late T. Walter Deverell worked together to bring the telephone to the community.
We quote from the story of the Deverell farm in the book Dalrymple on the Lake as given by the late Mr. Deverell. “Until 1913 when the Sebright Telephone Association was formed, communication was confined to horse and buggy travel. Speedy as it was compared with the 1800’s when travel by trail was slow and tedious, a very definite need for rapid communications was felt by everyone. John D. Flemming of Dartmoor and I were original planners of this local system. We investigated the possibilities from every angle and finding most people anxious to cooperate, we were able to go ahead and have the line built. Each subscriber bought shares in the association at a cost of $60. About 60 people subscribed, who each paid $12 for an instrument.
When the Association was incorporated as a company in 1921, each subscriber had to take 20 shares at $5 a share. The project entailed considerable work as problems came up and were solved but the service that it has given to the community has well repaid our efforts.
An idea of the growth of the company can be gauged by the comparison of the 1914 assets of $152 and liabilities of $101 and the 1956 audit showing receipts of over $5000 and expenditures of over $4000.”
The 1970 statement showed receipts listed at $25,286.02 plus assets carried forward and expenditures of $11,665.04 mainly operator’s, secretary’s and linesman’s fees.
Minutes of annual and other meetings exist and are informative and often entertaining as the various boards of directors tried to keep the fledgling company going. In minutes of the association’s first meeting, John Flemming was elected president, James Graham , Vice President, T. Walter Deverell as Secretary-Treasurer, and Joel J. Day, Thomas McLeish and John McGillivray as Directors.
Douglas Deverell has copies of correspondence written by his father when the Association was formed. A number of books which were used as guides to the actual building of the line and the setting up of the Association are also in his possession.
One book titled “Telephone Systems 1920” indicates that there were hundreds of such private companies with a small number of telephone subscribers. Sebright telephone Association is listed as having 75 telephones, 42 miles of poles and 112 miles of wire.
FINES
A tiny pamphlet titled Rules and Regulations; Sebright Telephone Association is lists10 articles which are to govern the members of the Association. Two articles which are of interest are; any person or persons refusing to cease talking at the expiration of five minutes when requested to do so by any member wishing to use the line, shall be fined 10 cents for each and every offence.
No abusive or profane language shall be permitted to pass over the line. Any person so offending shall be fined the sum of $1 and shall be deprived of further use of the line until the fine is paid.
Minutes of March 8, 1913 show that James Graham moved and James Johnston seconded a motion that the wage paid for labour is 16 cents per hour.
Russell Day, whose memories encompassed the age of the company, remembers several incidents which are of interest. He recalls that the minister was not charged a membership fee but as a service to the community, he paid only his personal long distance calls. Mr. Day says the first meetings were attended by all shareholders and were lively sessions. However by 1950 a notation in the minute book states that there were only 16 shareholders present and even fewer on record at meetings of later years.
Arthur Thompson at the age of 91 recalls the inaugural meeting of 1913. He held the office of Secretary-Treasurer from 1927 to the end of 1957.
The first account of the Secretary-Treasurer’s fee shows that he received $50 per annum. Later it was based on the number of subscribers as was the operator’s rate. This system worked fairly well but it was remembered that if a subscriber had his telephone disconnected in the middle of the year, the Secretary and Operator had their cheques somewhat reduced. The Operator always received 10 cents for each call put through the switchboard after 10 pm and before 6 am.
Mr. T. Walter Deverell and Mr. John D. Flemming received the first two telephones to be installed and share #1 in the newly formed Company went to T.W. Deverell. The original is kept as a memento by his son, Douglas Deverell.

VITAL INTEREST
Harold Thompson has always had a vital interest in the Company. He remembers that the Uphill line was added in 1919 and the Sadowa line in 1921 giving service to the entire area which has always since been united by the telephone line.
When asked about his years of service as linesman for the Company, Mr. Thompson said he had done a certain amount since 1919 but was steadily employed since 1930 with the exception of two years. His knowledge of the whole system was unsurpassed. For the last few years, Eric Day and Elgin Thompson worked with Harold to maintain the line. They assisted by others when lines were being built.
Considering the number of years the system operated, there were few changes in Operators. The first was Mrs. George Young of Sebright, then Mr. and Mrs. Neil MacDonald of Sebright who was followed by Mr. and Mrs. Robert Young in 1945. Robert Young was the son of the first operator and his wife served until 1971.
There were annual votes of thanks and appreciation for their faithful service from the Directors. They became personal friends to their subscribers who often enjoyed a chat about the weather or the latest news before being connected with their call.
Six long rings indicated am emergency which nearly always meant a fire. A great number of men could be recruited in a matter of minutes by an alert operator.
Many names keep appearing in the minute books. The following list of president gives some indication of those who shaped the business policies of the company. John D. Flemming, 1913 – 16; James Canning, 1917-19; Joel J. Day, 1920-21; Joel J. Day, 1920-21; James Canning, 1922-25: George Gilbert, 1926-30; Andrew McCaughey, 1931-32; T. Walter Deverell, 1933- 49; Howard Flemming (son of J.D.), 1950-51; Walter D. Deverell, 1952- 53, Harley Fulsome, 1964-65; and Russell Day, 1966-72.
While this list gives only the Presidents, it would be impossible to list those who served as Directors over the years. It is safe to say that many men of the area served in this capacity. This never brought anyone large sums of money. In 1950, Directors fees and mileage are listed from $4.80 to $9.80 per annum. The rate at the time of closing was $19 per meeting amounting to $50 in 1971.
Secretaries for the Sebright Telephone Company included T. Walter Deverell, 1913-1926, Arthur Thompson, 1927-69, Arthur Radway, 1958-69 and Jon McMahon, 1969-72.

COMPARISON
An interesting comparison of fees can be made by looking back. In 1917 the Secretary’s fee was $50 and in 1971 it was $400. The Operator’s fees in 1914 were $165 and in 1971 it was $6,215. Labour in 1914 was paid 16 cents an hour. This figure climbed to $2 an hour and in 1917. Linesmen in 1929 were paid 40 cents an hour. In 1971 they received $2.50 per hour.
The Sebright system’s switchboard was sold to John Govier of Sebright after Bell Canada took over service.
The minutes of the annual meetings from March 4, 1913 to the end of the Sebright Telephone Company were contained in a single black book. There was just enough room left in the book for the final meeting.
DIRECTORS FOR THE Company when the switchover was carried out were Russell Day, President, Emerson Day, Chester Graham, Elgin Thompson and Douglas Deverell. These men engaged in considerable discussions in order to arrange the changeover.
In a final letter to subscribers, Russell Day thanked everyone on behalf of the directors for their cooperation during the past 58 years. He assured everyone that bell Canada with its 38,000 employees promises to give good service.
Printed in Orillia Daily Packet and Times, Friday. July 7, 1972

Open House – Sebright
An Open House at the home of Bob and Bessie Young of Sebright will be held on Saturday, July 15, 1972 to honour the couple. They served as around the clock operators for the former Sebright Telephone Company system for many years. It is hoped that many subscribers will turn out for the activities which begin at 7 pm. Orillia Daily Packet and Times, Thursday June 15, 1972.