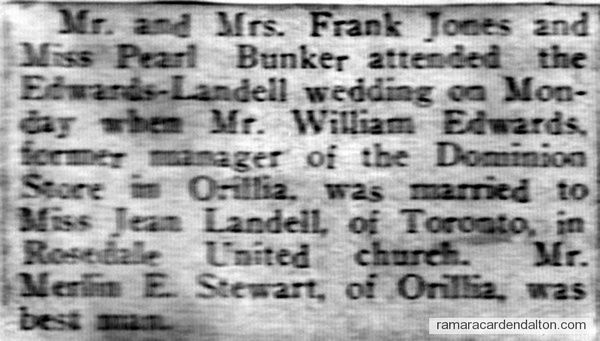 INTERESTING HISTORY OF EARLY DAYS IN TOWNSHIP OF RAMA

When she was 90 years of age, Mrs. Thomas Oliver, who died on Friday in her 93rd year, wrote by hand a history of her life. The document contains many interesting descriptions of the early days of the white settlers in the Township of Rama. Extracts from the history are given below:–

I was born in Shanty Bay on May 5, 1854, and a few months afterwards moved to McPherson’s Quarry , Rama Township, where we spent the summer; then in the autumn moved to Atherley and resided there until spring.

Mr. St. George and Mr. O’Brien, of Shanty Bay, built three schooners. One was called Queen, and another St. George, and the third named Fitton’s. These were used to transport the stone from the quarry to the railroad, where it was loaded on cars and shipped to various points throughout the country. Some of it was taken to Toronto, where it was used in the construction of the Provincial parliament buildings.

While there were hundreds of Indians in Rama at the time, there were comparatively few white people. About the only whites I saw in my childhood were the men employed at the quarry. As for companions, I had only a dog, a cat and a white gander.

One source of drinking water was from a cold spring at the foot of the rocks, and mother and I had to haul the pails up many steps. Rama at that time hadn’t the advantage of good roads, just cowpaths.

There were plenty of fish to be had, and when spearing them, the Indians used a jack-light and burned fat pine. They traded their catch for meat, butter and flour. Consequently, we always had more fish on hand than we could use. Mr. O’Brien had 21 men employed at the quarry, and my father was foreman. Mr. Duncan Cameron operated a general store at Atherley, where liquor, among other things, was sold.

I recall watching the steamboat, Morning, coming in to the rather neat wharf there. With the coming of spring, we returned to the quarry and remained there again until autumn.

When a blast was about to be set off, one of the men would carry me to a shelter beneath some rock that I might escape the falling debris.

Oxen were the chief Rama means of transport, and there were only two teams of horses in the whole locality. It was necessary for inhabitants to walk to Orillia for groceries and transport them home on their backs. Mr. O’Brien kept us supplied with groceries, for the men who worked at the quarry boarded at our home. We eventually father continued farming there for the duration of their lives.

As I grew a little older, a Mr. Armstrong who taught at the Indian school, came frequently to our home, bringing me a lovely hymnody and teaching me to read and write. On leaving school, he became a Methodist minister. I did not begin my formal education until I had reached the age of ten. Along with the McPherson children I attended the little white frame school. It had high desks and a huge box stove amply supplied with pine and maple for fuel. A Mr. O’Brien was our teacher, and he was eventually succeeded by a Mr. William Heavener. At that time the Indian stone church was being erected, and a certain Mr. Damp was the stone mason.

There was no bell on the school. The Master, as we called him, would come out and call “Inside, inside, I say!”, and at noon he would say, “Play.” At four o’clock he would dismiss us by calling, “hats on”.

Before the stone church was built, the Indians worshipped in one made of wood. I remember a terrible storm one night which blew the church down, and carried the bell quite some distance. It was then they decided to build the stone church. That was over eighty years ago.

The minister was Mr. George McDougall, who later lost his life hunting buffalo on the prairie. When he left Rama to go West, it took him a very long time to reach his destination, as it was in the days before the railway across Canada, and he had to travel by means of canoe.

New Year’s was a great feasting time with the Indians. They would load the tables until they creaked with roast beaver, venison, wild duck, partridge, geese, and turkeys. There’d be a time of singing, with music supplied by their splendid choir. When the minister had spoken, his words were interpreted to them in their language, for few of those assembled had the ability to speak English. Bazaars were frequently held, and the Indians offered much finer quality goods than to-day.

They were an honest as well as friendly people. If they found anything, even as small as a handkerchief, belonging to anyone else, they would hang it up on a tree limb that the owner might have no difficulty in finding it.

They would tap thousands of maple trees to make syrup and sugar and their sap buckets would be fashioned from birch bark. The sap would be collected daily except Sunday when they let it run over the top of the buckets all day and went to church. If you called on them at their birch-bark camp when they were sugar-making, you were treated to wonderful cakes of sugar. No one could make it taste as good as theirs did.

After the New Year’s feast had broken up, the Indians came marching down Rama Road with their guns. They fired shots into the air and called out the names of white people that they might shake their hands and wish them a Happy New Year. They expected a treat of some kind, and mother always had a large basket full of cookies for them. One New Year’s, my brother, who was home on a visit from Kingston, happened to be playing his violin when they called on us. They began jumping around and dancing and had him badly frightened, although they seemed to thoroughly enjoy themselves.

When Longford Mills was being built, it changed things around Rama. More money flowed in and benefited small farmers. When the Company brought in the machinery for the big mill, it took several teams of horses and sleighs to haul the long smokestack. The high lumber piles stretched from Lake St. John to Lake Couchiching. Huge scows brought it from there to the railway siding.

I have seen as many as seven steamers and tug boats on the lake at once. One was a passenger boat, the Carrilla. You were able to go to Orillia for 15 cents return. Another lovely boat was the Emily May, a large craft. There was also the Ida Burton. A much greater interest was taken in yacht racing and sailing in those days. Horse racing on the ice of the lake in winter time marked a special day each year. Everything has so changed that Rama to me no longer resembles the growing village that I knew.

The youngsters always enjoyed the Rama and Mara Fall Fair held at Atherley in October of each year. Once the judges were very angry when they got quite mussed up owing the fact that some people had put black grease on the pigs to make them look nice and shiny.

Rama was a great place for butternuts. We put bushels away each winter and got them by timing early in the morning when the ground was covered with nuts by the squirrels dropping them. This used to irritate the squirrels considerably. I saw very few wild animals. I supposed the Indians disposed of most of them with their guns and bows and arrows.

Mr. James McPherson was our magistrate and reeve for years. He sent his children to Model School in Toronto when they finished their schooling at Rama. When Catherine McPherson and I were sixteen years of age, she went off to Toronto to Model, and I went to Kingston to attend Johnston public school.

Now, with the exception of Mary, all the McPhersons have passed on from this life. Nearly all my friends and acquaintances of by-gone days have died, and I knew that my time will come soon for I will be ninety years of age on March 6.