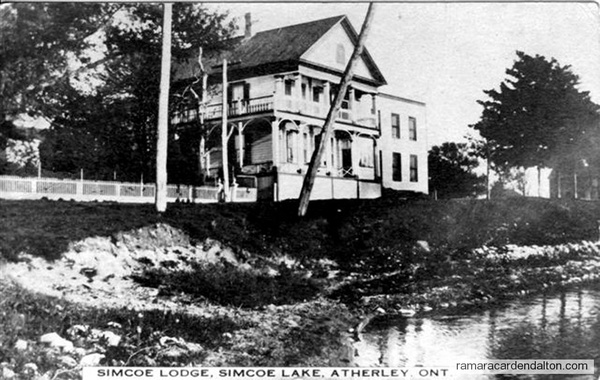 The story of Uptergrove Presbyterian Church may quite properly be prefaced by some reference to the men, who for a quarter of a century, were responsible, perhaps more than anyone else, for planting and cultivating organized religious life, not only within the confines of the Uptergrove congregation(or North Mara, as it was originally called) but far beyond these limits. At this time Mara was being settled by the McKinnons, McKenzies and others from the Islands of Coll and Islay, and MacDonalds from the Island of Tiree, all Gaelic speaking Highlanders.

In 1855 Murdoch Johnston and George Thomson raised money, firstly for a school, which was built, debt free. Then money was raised through the evangelistic efforts of these two men who travelled all over Ontario from Windsor to Kingston. In 1856 this church was built, on land purchased from James McKenzie, Angus McLean and Alex MacDonald for a token price of five shillings. Murdoch Johnston continued the leading of worship in Gaelic in this newly built church, and George Thomson, did so in English.

In those days communion was observed only twice a year, but it was an outstanding event which lasted for four days. Heart searching sermons were preached and “preparation” had a real meaning for those humbly venturing to partake of the solemn sacrament.

Murdoch Johnston was born in Coll, Argyllshire, Scotland in 1803–He belonged to the Church of Scotland and became quite active in evangelistic work.

He left Coll in 1847 with his wife, seven boys and two girls. They left Liverpool on July 7th, with a number of people who developed the fever from the smallpox. After ten days at sea all the family took smallpox and after four days, a son Alexander died and was interred in the watery grave of the Atlantic. After seven weeks and five days, they, still with the fever, came to a place called Quarantine Island (in the St. Lawrence River) near Quebec City. Upon landing, they were separated and taken away—the men to one hospital, women to another and the children to another. About two months later when Murdoch was somewhat better from the fever, he began to search for his family. “I found my wife and one child but they would not let me stay with her”. This would prove to be the last time he would see her before she died. Taking his son Neil with him, he continued to search for the others in Quebec and then Montreal. At one surgery office he found their names and was told that Donald had died. Searching in one hospital he found his daughter Isabella who had just died and then saw his son William. When he spoke to him in gaelic, William recognized him. He found James and Lachlan in another ward and they were recovered but he could not find John or Sarah. He made his way to Toronto where he lived with his sons for about six months while still suffering the effects of the illness and it was there his son Neil died.

Upon Murdoch’s recovery, he proceeded to Atherley with his sons, the last part of the journey being by boat across Lake Simcoe. Among his countrymen who had settled in the Scotch Hills (Mara) he met and was taken in by his friend Neil MacKinnon and discovered that this kind family had cared for John and Sarah during their travels when the children’s family were so ill. They were still in MacKinnon’s care and were finally reunited with their father and brothers. During this tribulation, Murdoch’s trunks had been stolen or broken into, leaving him with only a small piece of cloth. In response to a letter to his brother in Scotland, money was sent enabling him to purchase a small piece of land in Lot 25, Conc. 8, Mara.

Calls to Worship in the MacKinnon home were well attended. Further gatherings in various homes for study, prayer and exhortation were organized and carried on for a number of years before a church was built in 1856.

And This is the Will of Him That Sent Me,
That Every One Which Seeth The Son,
And Believeth On Him Shall Have Everlasting Life,
And I Will Raise Him Up At The Last Day. St. John VI, 40.

George Thomson and his wife Barbara (nee Smith) were both born in the Kirk Town of Auchterliss, Aberdeenshire, Scotland. In 1814 they were married and raised a family of eight children. They immigrated with their son Peter and daughter Botha in 1855 taking seven weeks to reach Quebec. They took a boat to Toronto and then the old Northern Railroad to Belle Ewart. From there they took a vessel to Atherley arriving in 1855. They settled in the south half of Lot 23, Concession 8, Mara. George was ordained in 1856. Together with his son Peter, and grandson Charles the family farm grew to 600 acres and was described as a model farm in the County of Ontario.

Both Murdoch Johnston, Founder, and George Thomson, cofounder were interred in the graveyard around Knox Presbyterian Church, Uptergrove.

Knox Presbyterian Church, Uptergrove was built on its present site in 1856. Services in the early church were conducted in Gaelic. Over the years several renovations were made, and in 1967-8 the present basement facilites were added.

Another major renovation is under way at present. The challenge to this congregation is as great as ever. May the future of this church be worthy of its past.