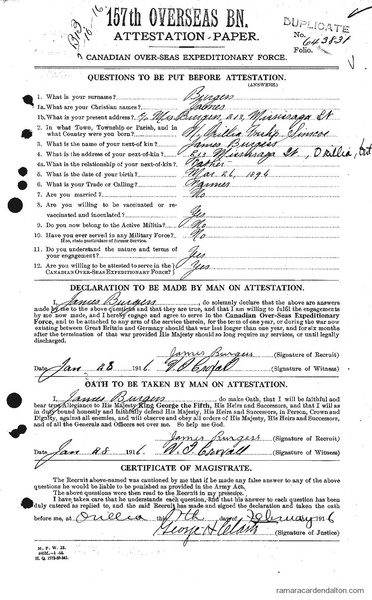 The first century ended and the second one began. Centennial Services were held on July 22, 1956, with the Rev. Walter Ross as guest preacher. He had grown up in this congregation. From near and far, many former members and friends came to attend the happy occasion.

The Rev. Malcolm Gillies was the minister at the time of centennial. He was a native of Scotland and had come to Uptergrove, Esson and Willis from a pastorate in Englehart. He retired in the fall of 1956 and moved to a home near Windsor, Ontario.

At the annual meeting in 1957, the congregation was informed that the Colin Smith farm had been left to the church by his daughter, Miss Annie Smith. Colin Smith was a former clerk of session, who had later moved to Western Canada. This farm was subsequently sold, and has provided the church with a sound financial base.

The Rev. Arthur Leggett began his ministry at Uptergrove, Esson and Willis in August 1958. As a young man, after receiving his education in his native England, he came to Canada where he answered God’s call to the Christian ministry. He graduated from the Toronto Bible College, and from the Presbyterian Theological Seminary in Louisville, Kentucky. His early ministry was in Saskatchewan. Later, he ministered in several churches in Southern Ontario and in Beauharnais, Quebec. For a few years he was a teacher at the Vancouver Bible School. After returning to Arthur, Ontario, he was called to Uptergrove, Esson and Willis. It was during his tenure that the oil stoves were replaced by an oil furnace, greatly adding to the comfort of the church. A Hallman organ was installed and new carpets were laid. The Rev. Arthur Leggett’s ministry was shortened due to poor health. He retired in 1962, but continued until August 1964, as supply minister. He was called to higher services later that year, November eleventh, 1964.

A native of Ireland, Pastor J. Mark Stone came to serve Uptergrove, Esson and Willis in 1964. He had attended the Faith Mission Bible College in Edinburgh. Following this he spent seventeen years as an Evangelist throughout Britain. He came to Canada with his wife and family in 1954, under the board of missions of the Presbyterian Church and served in charges in Nova Scotia and Ontario. In 1973 he was forced to resign due to ill health.

During Mr. Stone’s incumbency, major changes were made in the church building. Under the tireless management of Mr. David Drybrough and the hard work of the congregation, a basement was dug and the church completely renovated in the fall and winter of 1967-68.

In 1970, a parcel of land north of the manse was traded to Mr. Eric Orr, for twenty-five feet of land on the west side of the church property, in order to provide adequate parking space.

James and Maude Harrison both taught in secondary schools in Nova Scotia and Alberta before Jim began his theological studies in Edinburgh, Scotland. While he was serving the charges of Uptergrove, Esson and Willis in 1974 and 1975 he attended Knox College in Toronto, and completed his Master of Divinity degree. Maude promoted the acceptance into the congregation, of patients with mental and emotional problems, who are members of a nursing home at Uptergrove. They now attend services regularly.

Rev. and Mrs. J. Harrison returned to Edinburgh where Jim is now a religious education advisor for the local government area of Lothian Region.

The Rev. Lloyd Clifton came to this circuit in 1975 upon graduation from Knox College. He and his wife served these congregations until 1978 when Lloyd entered at the C.A.F. Base at Marret, British Columbia.

In 1979 the Rev. Dorothy Bulmer came to the charges of Uptergrove, Esson and Willis. Prior to this she taught at the Royal Conservatory of Music in Toronto. For twenty years she worked as a deaconess, thirteen of which were spent in Nigeria teaching choir master courses for the Presbyterian church. Dorothy was also active with young people, in camping and Sunday School work. After returning to Canada she devoted her time and expertise to dealing with those who came for help, to an emergency hostel for women, in Hamilton. Following this she entered Knox College in Toronto and in 1979 became an ordained Presbyterian minister.

The people of Uptergrove congregation, during the past twenty-five years have followed the tradition well established in the first one hundred years of this church’s life and service in the community. Always time and talents are freely given wherever need arises, and many members of the congregation have quietly and lovingly striven to share the love of God with others. One who gave so generously should be mentioned here. The late Mr. John A. MacDonald served the church in many capacities and was congregational and Board of Managers’ secretary for thirty-three years before his death in 1978.

The Ladies Aid which was organized during the first century, is still a very active organization. Although there is no Women’s Missionary Society, there is great interest in missions, and time and effort are given to the study and support of missionary work.

The Sunday School continues to function. Leaders have been faithful in endeavouring to lead the children to a personal knowledge of the love of God, through Jesus our Saviour.

As we reflect back over the past one hundred years, we give thanks. We pray for guidance in the days to come, and we trust that God will continue to bless us as He has in the past.