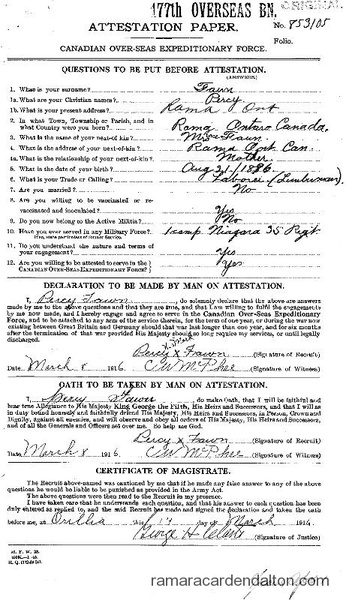 Mr. J. Jolliffe has purchased the Somers farm and has now a 300 acre farm, which he is fitting up in first class style. The entire farm has been fenced with the Russel patent fence under the supervision of Mr. Cranley, who is an expert at the work. Mr. Jolliffe is going extensively into the raising of hogs and cattle.

The annual nomination meeting for the Township of Mara, took place here yesterday. A large number of electors came to air their grievances, and to listen to the orators. The meeting was the most exciting one that has been held for many years. A great majority of those present protested against the action of the council in adding two percent, to all taxes unpaid on Dec. 15th. The action was wholly uncalled for. The taxes of Mara are collected with little trouble. The fact was that in this, as in many other instances, Reeve O’Donnell introduced the thing, and the other fellows were afraid to oppose Michael. There are plenty of candidates in the field for 1899. Messrs. McRae and Gillespie are old veterans who have come back at the request of a large number of ratepayers.

Mr. Jolliffe is one of the most extensive farmers in the township. He has been a successful lumberman. In selecting men to manage public affairs, we would choose those men who have been a success in their own affairs. We should as far as possible select thorough business men. From some of the old councillors, and an occasional ratepayer, we hear the remark, “What business had McRae and Gillespie coming back, they went right through, had all the honours, Why should they not let others do the same.” In reply I would say, positions in our council are not simply positions of honour; they are positions of trust; positions requiring men of business application.

If the ratepayers are so satisfied with a servant as to permit him to pass form the lowest position to the highest, all well and good; if after a few years service a councillor is rejected, he has no right to complain of those who competed with him. And if at this juncture the ratepayers become disgusted with the material they have had to represent them of late, and decided to invite a couple of men who served them faithfully some years ago, to again enter their service, it shows the wisdom of the ratepayers. This wasn’t business men’s council. In Messrs. McRae, Gillespie and Jollife, we have three successful business men. They will handle the affairs of the township with equal success . Elect them!