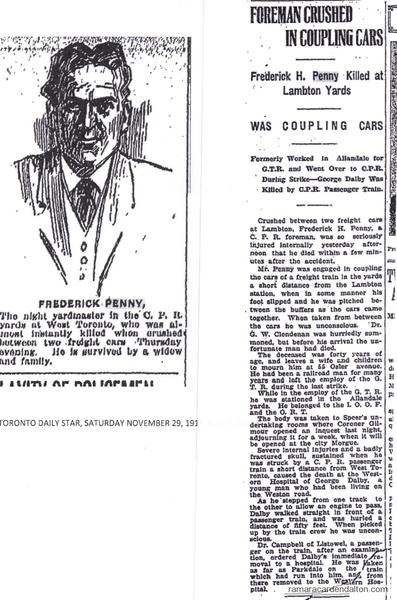 A public meeting of those interested in shipping facilities at the Monck Road station was held in the schoolhouse O’Connell, on Wednesday, March 20. The townships of Dalton, Carden, North Mara, and South Rama were well represented. Mr. Wm. Newman, the well known promoter of creameries, occupied the chair. The object of the meeting was to place before the public the result appointed to secure a grain warehouse, stock pens, and scales at the station, and to obtain from those present some idea of the traffic likely to be developed at the station.

The result of the committee’s work was embodied in the remarks made by Mr. Logan, representing the Canadian northern Ontario Railway and Mr. George A. Proctor, of the firm of Dobson & Proctor, Beaverton. Mr. Logan, who came from Toronto specially to attend the meeting, said the railway company would be willing at any time to do whatever was reasonable to facilitate the shipment of produce. Stock pens, he said, would be erected as soon as the weather permitted, and a gangway would be built for loading livestock on the single and double decked cars. Mr. Logan also stated that the railway company would allot a piece of land, on which to erect scales, at a rental of one dollar per year.

Mr. G. A. Proctor, in a short address, stated that his firm would proceed forthwith to erect a grain warehouse. The information as to the probable traffic brought out in the course of discussion evidently proved very satisfactory to Mr. Logan and Mr. Proctor.

It was also stated at the meeting that it would be necessary for the people to erect the scales themselves and the committee therefore proposed that shares be offered at $1 each until about $200 had been collected. It was thought that the sum would be sufficient to purchase a set of scales of five tons capacity and erect a shelter over them in keeping with the other buildings at the station. A small charge would be made for each weighing and the person who had the care of the scales would be paid a commission and any balance at the end of the year would be used to pay a dividend on the shares. It was announced that necessary forms and subscription lists would be placed with Messrs. D. Mulvihill & Co., Rathburn; Wm. Deverell, Monck Road; G. L. O’Connell, O’Connell, and E. H. Herring, Sebright, to whom application should be made for shares, and that one or more shares would be sold to any person. The meeting came to an end at a late hour.

Subscription lists and a supply of receipt forms have been placed with the parties mentioned, and the committee trusts that this matter of the scales will now be taken in hand by the people. The cost of a few shares is a small matter when compared with the advantage of having such a thing as scales of five tons capacity in the neighbourhood. In fact the station will not be complete without them. The Railway Company are giving stock pens. Messrs. Dobson and Proctor will put up a grain warehouse, and now, friends, “act well your part; there all the honour lies.”