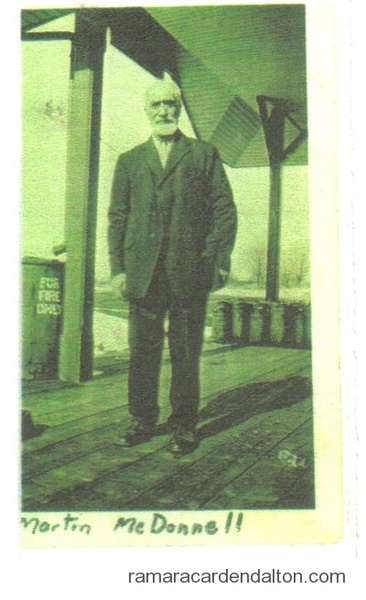 The coroner’s inquest into the four deaths in the burning of the Brechin hotel last week was continued at Brechin yesterday. Coroner Grant of Beaverton presiding. After hearing the evidence of James Osborne, Patrick McLean, David Collins, Victor Adair, Charles Clark, Charles McNarney, and A. J. Boyle, the jury brought in a verdict of accidental death, for which blame was attachable to no person. The verdict was as follows:

“ That the deceased, Mrs. Thos. McCawley, John McCawley, Dennis McCawley and Josie Callaghan came to their death by reason of suffocation and being burnt to death. We find that the cause of the fire is unknown. We further find that all necessary precautions were taken in regard to the safety of the said premises, and that no censure or blame can be attached to any person or persons in connection therewith.”

The evidence bore out the story of the fire much as it was given in the PACKET last week. There were fifteen people in all in the hotel the night of the fire. When they were wakened by the smoke, the whole basement of the hotel had been burnt away. Some made their escape through the windows, and some by a back stair. Mr. and Mrs. McCawley came down the stairs.

Mr. Thos. McCawley, proprietor of the hotel was brought to the Orillia General Hospital, suffering from pneumonia, the result of the exposure and of inhaling smoke. He is getting on satisfactorily. The two young women who were injured in jumping from a window are able to be about.

Mr. Thos. McCauley, proprietor of the Brechin hotel, which was destroyed by fire some weeks ago, resulting in the death of his wife, child and a servant girl, was able to leave the Ross hospital, Lindsay, on Monday. Mr. McCauley, it will be remembered, sustained severe injuries, and was taken to Lindsay and placed in the hospital.