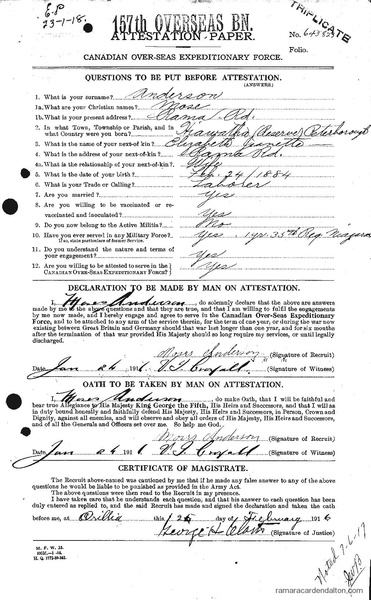 One of the most shocking causalities ever recorded in this district occurred at Brechin early Tuesday morning, by which four persons lost their lives. The victims are: Mrs. Thomas McCauley, her two children, John and Dennis, one six years of age, and the other an infant under a year, and Miss Josie Callaghan, a maid in the hotel.

The hotel burned is the Brechin House, and was owned and occupied by Thomas McCauley. The fire originated in the basement about 1:30 o’clock, and was caused by a defective furnace. Charles McNarney, the bar tender, was awaked by the smoke, and gave the alarm. The building was then rapidly burning, and the occupants had to make a hasty exit, some having to jump from the windows. Three maids were sleeping in a room on the third floor, Miss Maggie McNarney, Miss Etta Crosby, and Miss Josie Callaghan. The two former jumped form the window and were more or less injured by the fall. Miss Callaghan seemed to lack the nerve to follow their example, and while she hesitated it is supposed she was overcome by smoke and fell back into the burning building. Mrs. McCauley was carried out of the building but had died from suffocation. Her two eldest children were rescued, one a lad of eight, and his sister a year younger.

The rescue was effected by Victor Adair, Chas. McNarney and Patrick McLean, boarders in the house. Mr. McCauley was seriously injured, and it was several hours before he recovered consciousness, and learned of the death of his wife and two children.

The fire spread across the street and burned to the ground the office and residence of Dr. Gilpin. A bucket brigade did heroic service in preventing other properties from falling a prey to the flames.

The three members of the McCauley family who perished will be buried all at one time on Thursday morning. Miss Callaghan was buried yesterday.

Coroner Grant, of Beaverton, opened an inquest Tuesday afternoon into the death of Mrs. McCauley, and adjourned it until March 25, when the fire wil be thoroughly investigated.