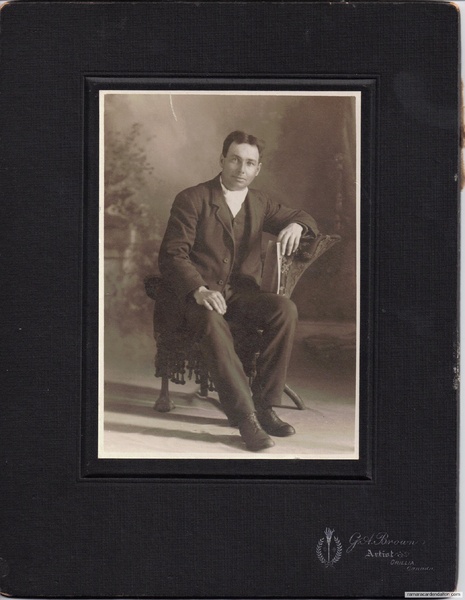 
The early pioneers of the area were mainly Irish and Scottish immigrants fleeing from religious persecution and lack of opportunity for land ownership, compounded by the terrible potato famine of the 1830’s and 40’s. With concern for their religious obligations, they gathered in small groups at ‘stations’ (chosen homesteads for the most part) for Mass and receiving the sacraments. Bishop MacDonnell of Kingston and Father Proulx of Whitby parish came to the area.
A Degree of Establishment of Parish was signed by Most Reverend de Charbonnel in November 1855. Thus, the first organized parish was founded at Uptergrove, and is the oldest Catholic parish in the northern part of the diocese. The pastor, Father John Synnott (1855-57) resided at Uptergrove and served the people of Orillia, Medonte, Brechin, and other locations in Mara and Rama until their own parishes were established.

In the early days, burials were in family burial plots on their homesteads. Later, a pioneer cemetery was located on the Getting’s farm (One story says the original cemetery was on the hill behind The George Smith barn and was moved when the railway went thru in 1872???) at Uptergrove, with the remains being moved to the present cemetery at St. Columbkille.

Our patron saint, Columbkille (521-597), was born in Ireland. After ordination, he established many churches in Ireland and Scotland. Known as a ‘gentle sage in love with Christ’, many miracles are attributed to him.

There were several long sheds built to shelter the horses. Farmers either walked or came driving a horse and buggy or in winter, a cutter. Travel could be difficult, especially in winter, with deep snow and cold. Hay and oats fed the animals while the parishioners fed their souls with the Word of God. The last shed was torn down in the 1940’s.

Father James Dollard (1901-1910) served when the present church was built and the old one torn down. The cornerstone laid July 19, 1905, was blessed by Archbishop Denis O’Connor of Toronto. The steeple bell and carved benches are from the old church. It features a spectacular hand hewn arched ceiling, in a ribbed vault style, covering the nave of the church without supporting pillars. Two rose windows, beautiful stained glass windows and carved High and side altars enshrine the statues of the Sacred Heart of Jesus, Mary and Joseph and St. Columbkille. The church is solidly built with cement block interior and brick on the outside.

The basement was dug and the soil was used to terrace the lawns during Father James Sheridan’s time (1910-17). Steam was put in the church, and a generator allowed electric lights and water to the house and the church.
The vault was built in 1926 and hydro came in 1927 in Father Joseph Coleman’s time (1924-37).
In 1931 the Silver Anniversary celebrations included a Mass of Thanksgiving, a banquet in the evening, skits and an old time dance.

Father Gerald Crothers (1948-56) had the walls behind the altars beautifully decaled. Carpet to the Sacristy was installed. His Eminence Cardinal McGuigan celebrated Mass and new Stations of the Cross were dedicated. A reception for 400 followed.

During Father Frank Voorwerk’s time (1960-67) and after Vatican Two, a new wooden Main altar was placed and the altar railings were removed. At this time a ghostly prank on girls cleaning the church received much publicity.

Father Sygmund Lewandowski (1972-73) was a Polish concentration camp survivor and friend of St. Maximilian Kolbe whom he referred to as Max. He died in the rectory in 1973 and was waked with an all-night vigil.

Father Garnet Sauve` (1977-93) During the restoration of the rectory, a fire broke out, but the rectory was restored as close as possible to the original style. Many renovations were done at this time. White stone Main, altar of repose, and tabernacle altars were installed.
His Eminence Cardinal Carter celebrated Mass for the 125th Anniversary of the parish and the 100th Anniversary of the present church, followed by reception in the hall.

In 1998, the Archdiocese of Toronto joined the five Orillia area churches into one administrative unit with the central parish office in Orillia. Father Ian Riswick was the first Administrator of the Orillia Family of Churches consisting of Guardian Angels, Sacred Heart, Warminister, St. Columbkille, St. Francis of Assisi, Washago, and St. Joseph, Black River.

In 2002, St. Columbkille was honoured to host four Ecumenical Days of Prayer when Pope John Paul 11 visited Strawberry Island.
In 2005, the 150th Anniversary of the Parish and 100th Anniversary of the present Church, many renovations were made and celebrations held throughout the year.
His Eminence Cardinal Aloysius Ambrosic, assisted by Father Edwin Galea (1999-2007), Andrew Cyruk (2007-), Arthur Sequiera, Frank Voorwerk, Garnet Sauve`, and Deacons Alfred Stong, Leonard Andrews, Bernard Harris, Robert Sparks, celebrated Mass followed by a reception in the hall.

In the early years, parish picnics, the Holy Name Society, and the Christian Mothers have assisted the many dedicated priests to provide the spiritual, social, and financial needs of the parish. The Catholic Women’s League, started in the 1920’s, was again formed in 1953. It is still actively working ‘for God and Country’.
St. Columbkille Church, previously known for its garden parties and euchre parties, is now known for our fall bazaar, luncheons and dinners (with homemade pies). Many charities have been supported and church projects undertaken as a result of these activities.
For over 150 years, parishioners have come to St. Columbkille Church to receive the Sacraments, to pray, and to serve their Maker and neighbour. We are indeed blessed to have this beautiful House of God!
We are, also, thankful to the dedicated priests and deacons who have, and continue to, serve us.

Note: Does Anyone know when the Cemetery was moved —Mart